Calm before the storm. The sky is bright blue, a few clouds move slowly over the sky. People strolling along the streets, enjoying the first days of autumn filled with the last rays of summer sun. People murmur, some even walk in quicker steps. How comes that I am the only one who has realised how many people actually wear a backpack or carry a large bag with them? What might be inside of all these bags? The bags do not appear to be heavy at all…
It seems as though all of a sudden the white clouds in the sky multiply. How can that be? The sun is still shining. April weather in September? Hold on for a second, Is that actually SNOW??? 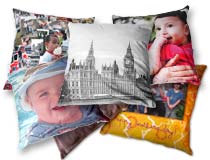 White flakes trickle down from heaven, to be honest, it seems as if they just whirl wildly through the air. Loud laughter, cheering, crowds of people.

What is going on here??

Your personalised cushions as a trophy of the flash mob

Anyone who has ever attended a flash mob or has seen it on TV or the Internet will know what I am talking about. (Do you remember those T Mobile advertisements with the people dancing at Liverpool Street? Flash Mob. Thousands of people singing their hearts out on Trafalgar Square? Yes, Flash Mob.)
For everyone else, flash mobs are seemingly spontaneous crowds doing weird or crazy things in public places . These flash mobs usually get announced on social networks or blogs and have a sole reason: The fun factor. Obviously after participating in such a pillow fight I described above there might be an urgent need for? New and personalised Cushions! What about the best picture of the whole pillow fight flash mob, you in the middle of the crowds, surrounded by feathers? That seems to be just the perfect photo for your personalised cushions.

Personalised photo Cushions are not only cuddly and soft but also great and durable at the same time. The combination of your favourite pictures and wonderful quality materials  make truly unique Christmas Gift Ideas. Why not surprise your friends and family with their very own personalised cushions for this year’s festive season? I hear that’s not big enough, you want to give them bigger Christmas Gifts, but you like the idea of personalised cushions? Well, why don’t you just create one or two lovely bean bags for them as unique Christmas Gift Ideas?